Cellphones in Classrooms? I’m Not Convinced

Some schools have tried cellphones in the classroom, and done a complete u-turn. Other schools are making a success of it.

Nadia is the Curriculum Manager for WorksheetCloud.com. She graduated from Stellenbosch University with Masters in Psychology and was the Head of English at a high school in Cape Town. 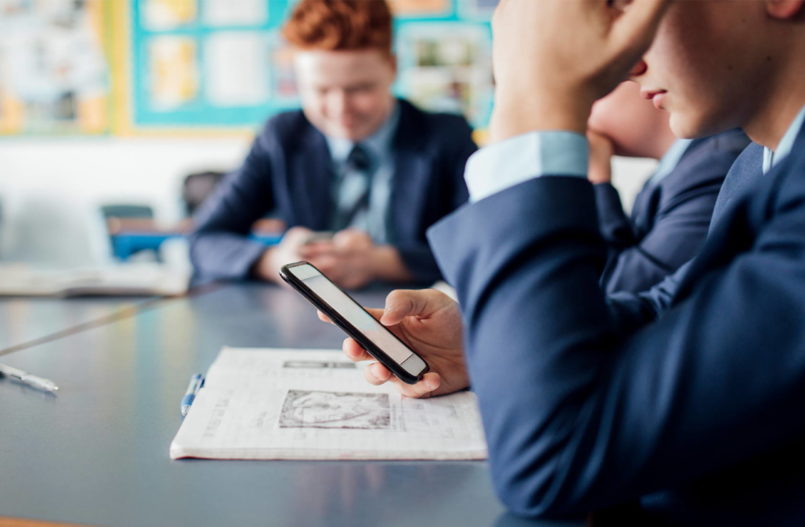 “Miss, did you see on the news last night? They showed how kids are using their cell-phones in classrooms during lessons. That’s so cool!”

“Would you like it if your class were allowed to use cellphones to help with lessons? Do you think it will work?”

“Yes Miss, that would be awesome if we could! But I don’t think it’ll work ’cause you know our kids; they will go onto BBM or MXIT to chat instead of where they supposed to go.”

The conversation above, between one of my Grade 8 students and I, illustrates some of my concerns with using cell-phones in the classroom and is part of the reason why I haven’t attempted to use cell-phone technology in my own classroom yet.

I am not oblivious to the technological advancements that are available to be used in classrooms, in fact I have been to a very inspiring and interesting EdTechConf (Education Technology Conference), but am still not convinced that it is currently implementable in ALL classrooms in South Africa. I find that teachers and administrators who so vigorously promote ICT for the classroom, generally come from rich schools who can afford to install interactive-whiteboards and data-video projectors in every classroom, who have up-to-date computer labs, where teachers have all been given laptops by the school, where iPads are available for learners to use, and where learners all have the latest cell-phones and have their own computers and internet access at home.  So, what about those of us who teach in the poorer schools?

Every time that I have alluded to this factor of a lack of funding to teachers from economically advantaged schools, I have been given a superior look followed by a few sympathetic words, after which the topic of conversation was abruptly changed. So, I would just smile to myself and continue to search for ways to improve my lessons and make them more exciting without using ICT, other than occasional PowerPoint presentations or movie viewings with my school’s one data-video projector and retractable screen from the 80’s, when it is not being used by another teacher. Of course I would also like to make more use of technology, as I can see how it can benefit the learners and make them more interested in lessons and therefore was very interested when the use of cell-phone technology in classrooms started becoming more common about a year ago, as this seemed to be a cheaper way of using ICT in the classroom.

Since I have become aware of it, I have considered all the admin around using cell-phones in classrooms and have stumbled upon a number of obstacles that I am struggling to overcome. I even let my Grade 8 English learners do their investigation task on the topic of cell-phones in schools and found that most of my fears and assumptions around cell-phones in the classroom were confirmed. Firstly, as I teach at an economically disadvantaged school, not all learners in my school have cell-phones. The phones of those who do, range from old Nokia’s from the turn of the century, to brand new Blackberry’s with full internet access and all the apps available on such phones. This implies that not all learners have internet access, which is obviously required if you want learners to search for information on Google or other search engines as part of a lesson. Coincidentally, most learners from my school have pre-paid phones and therefore do not always have airtime, which again implies that they do not always have internet access. This means that in a classroom of about 30 learners there could be 20 of these learners who have cell-phones, but only 10 of them who have airtime at that moment. So, how do you include ALL learners in a lesson where cell-phones are being used to search for information, without them feeling left out, getting distracted or complaining about the lack of education to their parents?

My concerns, however, do not stop there. The school I teach at has a very strict cell-phone policy, which states that if a teacher sees a learner with a cell-phone, the cell-phone has to be taken to the principal immediately and the parent has to fetch it. This may seem like an archaic policy, but was implemented because of the problems experienced with cell-phones at the school initially, with learners sending messages to each other during lessons and not focusing on learning, learners spreading rumours about each other on chatrooms on Mxit during school times and learners using cell-phones to cheat during exams. This policy has worked to a large extent with learners not messaging each other during lessons anymore, but even now two learners were caught during the June exams sending answers to each other via Bluetooth on their cell-phones. Therefore, if a teacher wants to use cell-phone technology as part of a lesson, it will have to be extremely well implemented and organised so as not to undo the principles that the cell-phone policy has instilled at the school.

This leads to one of my main concerns, namely how do you ensure that learners go to the website or application on their phones that the teacher has asked them to access and not send text or BBM messages to each other instead? In a poorer school the size of classes are generally between 35 to 50 learners per class, with no teaching assistants, and it is impossible for one person to check that all learners are on the same website on their cell-phones at the same time. By the time the teacher has moved through all of the desks to check learners’ phones, the first 10 learners will already be on Mxit or Facebook. Teachers are either lucky or naive if they think that their learners will not go onto Mxit or Facebook during lessons. I have heard people say that teachers should use Mxit and Facebook by letting learners talk to each other via these applications about subject related content during lessons, but how does this encourage face-to-face communication between learners, and improve learners’ speaking abilities, especially in a language classroom like mine? Why use Mxit or Facebook to talk to one another when you’re sitting in the same room!

So, there it is. My concerns around cell-phones in the classroom, and I’m sure other teachers will be able to think of even more. However, I have not raised these concerns simply because I feel like standing on my soap-box preaching to the masses, but rather because I want a solution to these problems. I also want to be one of those starry-eyed presenters at these Educational Technology Conferences, so excited about how much their learners are benefitting from the technology they’re implementing in their classrooms, but I’m just stuck behind the barriers created by an economically disadvantaged teaching environment. I am also sure I am not the only teacher in this position. So, I appeal to readers to respond to the statements I have made and concerns I have raised here and to offer me a solution to this problem.  Perhaps, a different perspective on this problem will help me to come to an applicable solution.

Nadia is the Curriculum Manager for WorksheetCloud.com. She graduated from Stellenbosch University with Masters in Psychology and was the Head of English at a high school in Cape Town.